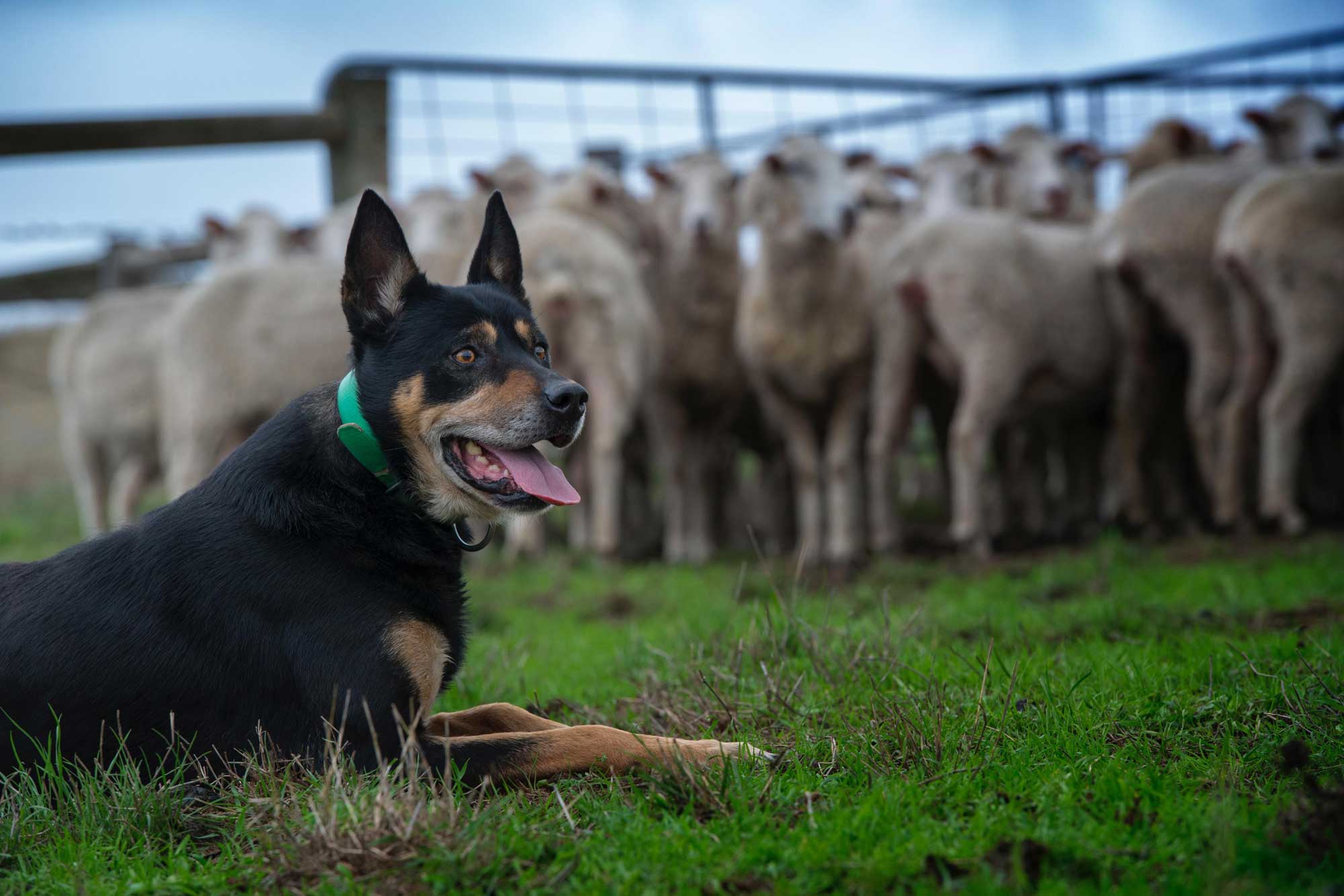 The Origin of the Kelpie

The Australian Kelpie is one of the breeds descended from dogs known as Scotch Collies.

Kelpies are world famous for their intelligence, loyalty, courage and tenacity, working with all types of livestock and in varied conditions, throughout Australia.

The black and tan bitch which became known as “Gleeson’s Kelpie” was whelped in c1870 on George Robertson’s property, Warrock, north of Casterton, in Western Victoria. Her appearance was that of a Collie dog. She is described as being black and tan, with a medium length coat with a red tinge on it. Her ears were semi-erect and came up when she worked. Because there are no written records of the pedigree of “Gleeson Kelpie,” her hereditary origins are open to conjecture.

These Collie dogs were sometimes known as the “Highland Smooth Collies” or “Hill Gathering Collies” and were predominantly black and tan, black or occasionally red, slate grey or cream. They had very little, if any white markings.

Many of the original settlers in Tasmania, Victoria and South Australia were Scots.

Naturally the Scotsmen had experience with the management of sheep in rugged areas and knew of the necessity of having good dogs to control the mobs. These dogs were imported from various areas of Scotland.

Amongst Collies there were different types: Short haired, medium or long haired, tall, medium or compact in stature. To complicate matters further there are a multitude of working styles.

The Glenelg river country, where Warrock is situated is typified by rolling hills and sometimes almost sheer inclines as many smaller tributaries have carved their way to the river of millennia. The native bush in the area is thick, but according to Major Mitchell, who explored the region there were magnificent areas of open grass lands. A good mustering type of dog would be indispensable in this country.

At the time Kelpie was whelped, itinerant stockmen used to travel to work at peak times on properties. Jack Gleeson, a young man of Irish descent, had travelled up from the Koroit area to work on Dunrobin which was across the Glenelg from Warrock. An accomplished horseman, he would have also known the attributes of a good Collie dog as he was undoubtedly familiar with the Rutherford strain. He had worked with and was a friend of Mark Tully, a Scotsman, of the family who bred top class Collies of this strain and would continue to do so into the early 1900’s.

As Jack already had access to very good dogs, clearly the parents of the bitch which came be known as Gleeson’s Kelpie, must have been talented in a special way because Jack arranged to swap a stockhorse of very good type for a pup. After the swap Jack continued North to Ballarook, in the Wimmera area of Victoria, where he again worked at shearing. It was there that he began the young Kelpie’s training.

When the seasonal work had finished he moved on to the Riverina where he met up with Mark Tully at Goonambil station, Urana, in the Wagga area.

Mark gave Jack the young black, shorthaired, prick eared dog, Yarrawonga Moss, a pedigreed dog from the Rutherford kennels, whose parents had been imported from Northern Scotland. Many dogs of this origin were imported to Australia.

Jack had another reason to go to the Urana area. His interest was in Mary Ryan whose family held a large holding there. Eventually they would marry. He probably met her while working at Ballarook, as her father owned other properties in that area.

Jack moved on and took up a position on North Bolero, and later North Yalgogrin, near Ardlethan, NSW.

R.W. Creswick who knew Gleeson wrote: “With Kelpie and Moss, Gleeson would do what he liked with sheep, whether few or many. The writer on many occasions had the opportunity of seeing them at work, both mustering and in the drafting yards and never saw their equal.”

Kelpie was mated to Moss for two litters, from which came, amongst others, Swan and Apps Old Lass. Then she was mated with Caesar, a son of the two black and tan Collies, Brutus and Jenny, which were imported from Jedburgh, Scotland by Elliot and Allan. From this last mating, a black and tan bitch was given to Mr C.T.W. King. He named her Kelpie after her dam. She became known as King’s Kelpie and, in a trial at Forbes, NSW, came equal first with a Collie dog, bred by the Gibson family and worked by C.S. Gibson (Gibson also later became involved with the kelpie breed).

When King’s Kelpie was bred from, her pups were referred to as Kelpie’s Pups and eventually, the dogs descended from her and Gleeson’s Kelpie were called Kelpies.

King’s Kelpie was mated to various dogs including Moss and then Laddie, a brother to her own sire, Caesar. Sally, a daughter of this mating was then mated to Moss and produced amongst others, the black dog which was known as The Barb and from him came the Barb strain.

Others who contributed to the early ongoing development of the Kelpie breed were, King and McLeod, who imported dogs to outcross with the original family, and John (Jack) Quinn who was extremely successful with his dogs in trials and is reputed to have maintained more of the original blood.

It is important to bear in mind that the name “Kelpie” was only adopted, in the first instance, by owners associated with the development of the strain in a relatively restricted area. Dogs of similar origin were being bred over a far wider area. The Rutherfords’, Tully’s, Gerald Kempe, C S Gibson and others, persisted in the use of the title of “Smooth Coated Collies”, even after infusing the progeny of the “Kelpie” strain – “Clyde” and “Coil” etc. This is particularly true for the strains developed further out in the Riverina, Murray and Darlin River areas and in South Australia. These strains did not become known as “Kelpies” until much later.

Sadly, Jack Gleeson died at a young age, but his judgement in swapping the stock horse for young Kelpie on the banks for the Glenelg River in Western Victoria would provide a priceless legacy to Australian stockmen and women and to our huge livestock industry.

For many years the Australian economy “rode on the sheep’s back” and the Kelpies made this possible.

In more recent years, with declining profit margins in the livestock industry, the kelpie has played a vital role in improving the efficiency of stock movement and has contributed greatly to the ongoing viability of livestock farming throughout the country.