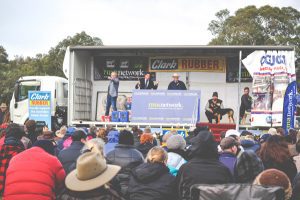 Snaring the top price for a kelpie at the Australian Kelpie Muster at Casterton on the weekend was a bitter-sweet moment for Jack Leonard, Melville Forest.

While Mr Leonard was happy to get the equal national record $12,000 top price, it also meant that he had to give up 18-month-old kelpie Dotti, with whom he had bonded while training her from an eight-week-old pup.

It was just the second time a female dog has topped the sale.

He said Dotti – bred from Moora bloodlines – had great versatility in both the sheep yards and paddocks, was easy to command and had an imposing bark.

Casterton Kelpie Association president Karen Stephens said those bidding for the dogs included a veterinarian who came all the way from Japan to buy but found the prices a bit of a shock.

Ms Stephens said the 21st Australian Kelpie Muster was another huge success bringing thousands of people from throughout Australia and overseas for a celebration of canine cleverness.

In the kelpie high jump on Saturday, Bailey again showed his athleticism by scaling a wall of slats to a height of 2.51 metres to gain his third consecutive win in the event. While the jump was not as high as his world record effort of 2.91 metres in a previous year, it was still streets ahead of his rivals. The hat trick of wins earned Bailey, who is owned by Tegan Eagles of Melbourne, a place in Casterton’s Kelpie Hall of Fame.

The muster featured novelty events including kelpies rounding up Indian runner ducks, doing a 50-metre dash up Casterton’s main street, and racing up a steep hill.

Ms Stephens said the planned Australian Kelpie Centre, which celebrates Casterton as the birthplace of the kelpie breed, would hopefully be ready by next year’s muster.

Tony Wilson, Woorndoo, won the Casterton Win A Kelpie competition – and is the lucky recipient of Go-Getta Talisman, bred and trained by Joe Spicer.

Mr Spicer said he supported the Casterton community and working dog auction because they were great people and they had done a great deal to promote the value of the well-trained working dogs.